Have you ever wondered what Joseph does aside from sing songs and go on adventures with only the baggage on his back?

HE SMASHES PLATES, OF COURSE!!!

As Joseph, fling your hat into as many plates as humanly possible and get the highest score you can! Plates! Plates everywhere!

Hope you are all having a swell April Fool's Day.

This is a small taste of what's to come!

For what it is I think this is pretty well done.

I like that there is a brief pause between hitting the key and the hat being thrown it really adds to the pressure of making a choice to maximize the earnings from a throw.

I can see this being added to a larger game as a mini game and perhaps with a more appealing looking sprite for the main character (something to match the turkeys in the background) and adding some depth to the plate rotation itself (as they are currently just a static image spun on it's z axis) I could see this being it's own kinda mobile game or something.

My only other recommendation if we were to see Joseph's Plat Smasher ULTIMAX UNLIMITED is that perhaps have the game be started by pressing the X button rather than Z because if you're skipping through the tutorial screen you may just assume that it's Z to throw. 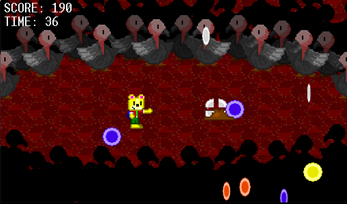 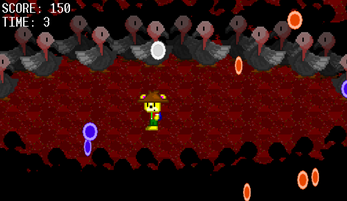