I've just bought the game, but I can't find any download links. Can you send me the game files or a download link, please? Thanks in advance.

The executable is shown on the page.

It still tells me to buy it, and it doesn't appear in my purchases page. This screenshot was taken after I bought the game a few minutes ago, and when I click the "Buy Now" button, it still takes me to the payment links. I also didn't receive any download links via e-mail. 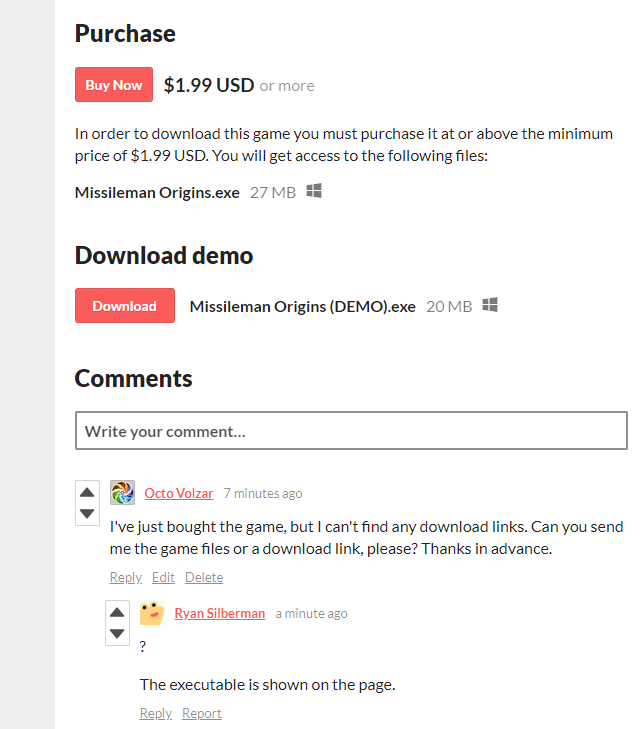 Perhaps see what you can do here?

I already read this link. Maybe I'll have to contact the support of itch.io 'cause it's the only thing I can do now. Thanks for the help anyway.

I have contacted itch.io support and they provided me the download link for the game. I apologize for any eventual inconvenience and for the late reply (they took the entire weekend to answer my e-mail). Also, thanks for the help and your attention. As a big fan of Megaman and other old-school platformers, I'll certainly enjoy playing your game. Thanks again ;)

The game's visuals may not be impressive (the tiles and character sprites really need an improvement. Some backgrounds are good, some really need more life to them) but the level design is actually very good for a small six stage game like this.

The levels encourage you to explore every facet, up and down, using Missileman's ability to walljump ala Megaman X, and while the enemies may be simple in nature, the game finds ways to use them to their fullest potential. In fact, one thing to like about the game is that it asks you to use the full potential of Missileman's jumping, running, shooting and walljumping. The six levels themselves vary in what they contain. The first level is a plains where Missileman's entire school try to go past the obstacle course, a series of simple jumps. The second takes place in a laboratory's depths with platforms that get affected by your shooting and a second half where Missileman is flown across a large part of the laboratory while shooting and evading oncoming enemies.

It's one of those games where you have to see it for yourself in order to believe that it has the potential to keep you entertained for the hour or two that it takes to finish the game. Behind the simple art is definitely a game worth expanding on.

Other facets include the sound effects which should be improved. Especially bullets in the 4th level when they hit a wall. It feels like some old NES game glitching out a sound effect. The music goes well with the game. The one I liked the most was of the 3rd and 6th stages. The controls feel tight with the running and shooting, but you may miss some jumps especially when going off a ledge, and there's a bug where walljumping can get you stuck in a wall, forcing you to quit the game and load it again (or if you fancy, hitting the R key to replay the entire level section without regards to checkpoints). As has been said, the graphics could use some improvement in the art style sector, tiles and some backgrounds included. The story revolves around Missileman, one of the robots a newly founded robot school, trying to find a student who went missing as he unravels a deeper plot that threatens the school itself. While it's a pretty standard plot for a six stage game, it does tie and explain the game's setting well. It also tests Missileman as a hero and what he must do no matter what.

Missileman Origins is a 7/10 for me. 1- for the walljump glitch and various other glitches (such as the enemies getting stuck to a platform), -2 for art. Overall, I enjoyed it.

When will it be done?

Sorry for the wait! It will be released in 2 days!